Did You Write the NYT Op-Ed Trashing the President? --- It Wasn’t Me!! 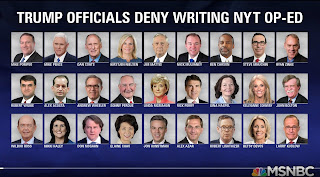 As I watched The Last Word with Lawrence O'Donnell on MSNBC on Thursday evening, I watched as he talked about the New York Times Op-Ed anonymous writer who wrote “I am Part of the Resistance Inside the Trump Administration” about the chaos and out of control Trump and his White House goings on.  The number of denials were exploding.

O’Donnell showed a picture graphic thumb nail size pictures of all (I think 25+) Trump officials who are currently saying “IT WASN’T ME” about who is Anonymous.   Immediately I thought of Shaggy - "It Wasn't Me".  I went directly to YouTube and searched for the song.  I found it as well as one with lyrics.  I listened… I danced... then sang along with the lyric version.  I’ve always loved that song.  Take a listen, the dancing bug will jump inside you.  LOL

When last have you seen White House officials making a declaration denying a negative incident trying to protect their ass?  Nixon!

When have you seen the Vice President of the United States making rounds on the Sunday morning cable newscast shows trying to make everyone believe that he is not the person who wrote a scathing rebuke article about the President that he is serving with where the person is, for now, known as “Anonymous?”  Never?

When was the last time you’ve seen such upheaval and chaos in the White House? Nixon!

You do remember what happened with Nixon, right?  If you don’t there are a plethora of books and videos available. 😊

It’s almost as if there is a puppet who is puppeteering the cast of characters in this White House and every incident in the Nixon White House is being enacted in this Trump White House.

Americans should learn from the past and do their best not to repeat it.  But blind ambition and greed will lead all to fall with a thud harder than the concrete ground they may be standing on.
I understand that the people who were grown ups and who voted for Nixon during those years are older and maybe a few are dead.  This was between 1968 through 1974.  Where were you in 1968?

So that means the lesson learned in that period is lost on the generation who came after.  We have a new crop of “I don’t care about the state of our Union, I only care about my party” group of people.  Unfortunately, these people do not read history books and/or do not pay much attention to politics and they don’t realize that politicians work for them not the other way around.

As I watched George Papadapoulos’ interview on CNN with Jake Tapper, I felt that George was lying on some things incredulously over and over again.  I’m sure this interview was conducted before his 14-day prison sentence for lying to the FBI regarding the now ongoing trial about Russian collusion in the Trump Presidential Election, but because he is such a fluid liar he didn’t care that his sentencing was upcoming.  This will come back and bite him in the ass.

He said that he wants to continue in politics.  He said that he is a young man, only 31 years old, and he plans to run for office in the future.  And here come the dumb voters lining up to cast a vote for him—just like they did for a man who openly said that he just grabs women by the pussy and they always say or do nothing.

You, American citizen, decides who determines your healthcare, how you survive in your senior years (and I mean old age not high school senior).

You, American citizen, decides who will care whether you’re able to eat, and/or pay your mortgage when you find yourself without employment.

So, why are you, American citizen comfortable with giving a man power over you by casting a vote for him/her?

When the United States President said that he fell asleep during President Obama’s first 2018 campaign speech over this past weekend, that should worry everyone.  Why? Because an astute president would want to know what his predecessor has to say about him.  He would want to be prepared for his rebuttal.  His actions were proving the NYT Op-Ed writer’s words to be true.  In my opinion, this president is proving himself to be lazy, careless, feckless and more!

Each and every person who has come out pleading their innocence in writing this op-ed are suspects.  Well, maybe one or two on the list are not capable of doing something this brave.  (Though I must admit that this type of bravery is questionable.)

Omarosa Managault Newman appeared on MSNBC's Weekend with Alex Witt (see video here) and she discussed this President’s actions, his unfitness for the job, his demeaner and the fact that a number of the senior staff members would reference #TFA (Time to Act) in text messages to each other after the unhinged President of the United States would behave in a manner worth enacting The 25th Amendment.  By the way, Omarosa’s book Unhinged is #1 on the NYT Best Seller’s list.

Some look at this as an attack on the President.  But don’t you feel that we as Americans should be more concerned about the contents of this Op-Ed rather than who wrote it and why they have chosen to be anonymous?

Omarosa mentioned that if this person were to reveal himself/herself, the hurt that this president and his cohorts would assault this person with, he/she would never be able to work in government again.  Is that ok with you?

I like to look at things in the perspective of “what if this incident involved a family member?”  If my child secretly discussed with me his teacher’s actions in class but didn’t want me to tell because he was afraid of the consequences, I would find a way to let someone who can possibly fix the problem without “outing” my child.  Wouldn’t you?

This is what Anonymous is doing.  This person went to the New York Times in hopes that someone, a grown-up, will do something and save our country.  Instead, everyone is more interested in who he or she may be, the one who dared to write this book.  Classic Elephant in the Room!

We cast a vote for people whom we believe we can trust with our country, our future, protecting us and the country by any means necessary.  Instead we get cowards, greedy, self-centered, and self-absorbed candidates.  We must learn about our candidates.  Study them!  Find out about their voting records, their honesty.  Country and its Citizens First!

Did You Write the NYT Op-Ed Trashing the President? --- It Wasn’t Me!!

As I watched The Last Word with Lawrence O'Donnell on MSNBC on Thursday evening, I watched as he talked about the New York Times ...